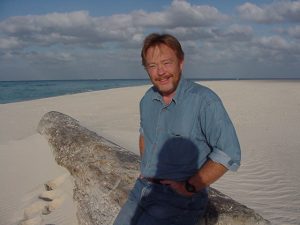 Anyone who has lived on Midway knows how well the Rumor Mill operates – like a finely tuned machine. The Rumor Mill was responsible for this story as being my favorite shark story.

After catching my shark (by dumb luck), Midway residents would often mention my name when the subject of sharks was mentioned. I was sure not qualified to be a shark expert, but I did somehow manage to catch one, a really big one – 11″ 7″ Tiger.

At the time, Rob Shallenberger was the Refuge Manager. His brother lived on Oahu and owned a nice sailboat. The sailboat had a large boom at the stern, for lifting heavy things from the water. The sailboat was often chartered by research folks to make stops along the string of Hawaiian islands that run between Kauai and Kure. The researchers were dropped off at islands we don’t hear much about, like French Frigate Shoals, Pearl and Hermes, Laysan Island and many more. The owner of the sailboat (Rob’s brother) would drop off the research crews, then retreat to his sailboat.  While waiting for the researchers to complete their work, he would often set out a baited hook and try to catch sharks. It was sort of a pass-time, something to do, while waiting for their next hop to the next island.

Eventually, the sailboat pulled into Midway. Soon afterward, Rob’s brother came knocking at my door.  At the time, I didn’t know this man. He looked like a rough/tough sailor, with a hook on the end of one arm. This is where the Rumor Mill kicked in. He said to me, “everyone says you’re the shark man here”. Ha ! He couldn’t have been farther from the truth. Without saying much more, he handed me a VHS video tape and suggested I take look. Without saying much more, he left my house and went on his way.

I sat down and watched the video tape. There he was at the rear of his sailboat when he first noticed something big at the end of his line. He used the rear-mounted boom to bring in his catch. Holly molly !! It was a HUGE Tiger shark !! – probably more than 15 feet long. There were a few others on the boat – all were cheering him on.

Rob’s brother (wish I could remember his name) decided to cut the shark open, to see what it had been eating.  He held a steady-running water hose, to keep the stomach acids from burning his skin.  He looked like Captain Hook in motion with a knife in one hand and his hooked arm holding the hose.

As he opened the stomach of the shark it was amazing to see things inside. There was a bottle of Joy dish-washing soap, parts of a turtle, a full-size man’s boot – WAIT – a man’s BOOT !!!  This caused everyone to stop in their tracks.  What if there was a foot inside the boot?  He carefully looked inside the boot – no foot.  He continued to squeeze items from the stomach of the shark. Suddenly, he found a shinny Rolex watch !!! He rinsed away the acid from the watch – the camera went in for a close-up – IT WAS STILL RUNNING !!!  Now the on-lookers were much more serious. I mean – a man’s boot and a Rolex watch that was still running !….. It was cause for everyone to wonder if a man had been wearing the boot and Rolex when he met up with that shark. There were no more surprises in the stomach of the shark. Not long afterward, the video ended.

This is where the Midway Rumor Machine kicked into it highest gear. I invited a couple close friends to come to my house and watch the video tape.  Everyone had the same jaw-dropping response.  Before long, there was a steady stream of people asking to see it too.  It was the talk of the island for several days.

Then came the day that the sailboat was scheduled to depart from Midway.  Rob’s brother stopped at my house to retrieve his video tape. It was at that point that he told me that the entire video was staged.  He did indeed catch that huge shark and he brought in up onto the deck of the sailboat with that large wrecker-arm/boom.  However, he then stuffed most of the large items down into the sharks stomach with a long broom-stick handle, including the man’s boot and his own Rolex watch. He then hoisted the shark back into the water and let it trail back from the boat.  At that point, he started the video recorder and taped the sequence as if it had all happened naturally. The video served as great Rumor Mill material on Midway. Once the truth was revealed, it also served for a good laugh – Only on Midway.