Story Of The Perch – One of Wayman’s best stories – 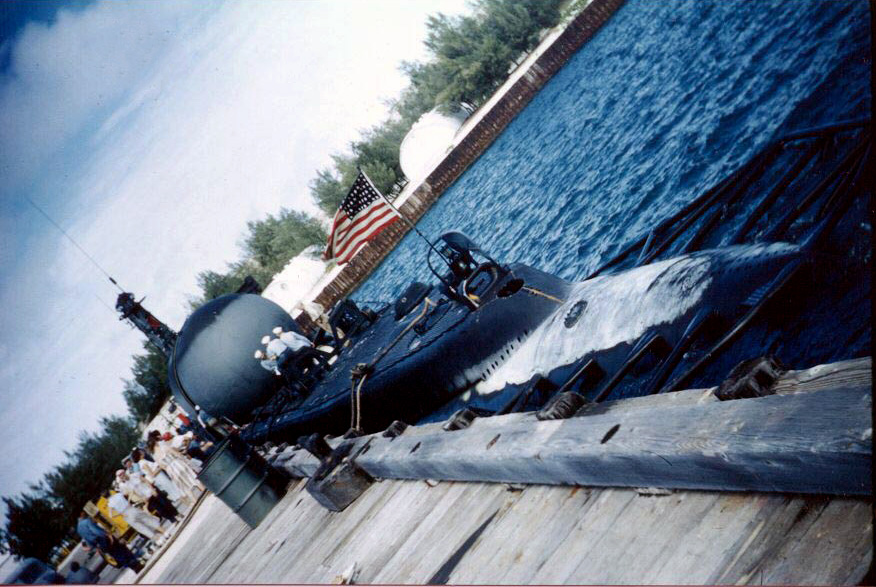 I remember it very well.  It was the perch and arrived at midway early 1952. I have several b & w snapshots of it and one of them was taken from almost the exact spot as this one. The sub was on a very special assignment as you might imagine from observing the strange looking tank located on the forward deck where normally a gun mount might be.    The tank appears to be a sphere but is not.  It is a long, tubular capsule that we see from the front.  Note the sailor standing in the entrance to the capsule at about the middle of it.

It was something new the navy was developing for use by navy frogmen.  We were at war in Korea and the navy was in a hurry to train some special people to serve as badly needed “commando type units”.   They came to midway for further training.  This was definitely not a fun and games exercise.  It was dead serious business.  I mean!  The capsule contained all the equipment the frogmen would need to slip away from the sub and penetrate the enemy’s defenses and do their job.

This training operation plan was for the sub to surface somewhere well outside the reef just enough for the frogmen to open the capsule, get their gear, come ashore somewhere, penetrate our island defenses, locate all vital facilities such as the power plant, ad building, CO’s quarters, flight operations, aircraft, hangers, harbor assets, communications systems and then mark all of the with a special orange and yellow dye to indicate they had actually been there and  “destroyed” those facilities.  Then of course, return safely to the sub. Now, please understand that this picture was taken after the fact when the exercise was over.  Prior to this, no one on the island knew anything about what was going to happen.  I’m not even sure that the co knew everything, or even anything about it.  Suddenly, the navy alerted us that a (friendly) commando type attack on midway was imminent.

We all went to battle stations with rifles, canteens, etc., but with no live ammo.  My station was in some Scaveola bushes at the edge of the south beach about the middle of the east-west runway.  We were then told more about the operation and what to do if we sighted any of the “enemy”.  We all began to get quite tense.  I watched the reef and lagoon as closely as I could.  The seals gave us fits.  We could see them popping up here and there continually, and of course we always thought they were the invaders.  Still, we were all sure we could catch those guys immediately when they came ashore, or at least shortly afterward.  We thought we were pretty good.

One day passed.  One night.  Another day.  Another night.  Then sometime in the early hours of the following day, the invaders hit.  They made fools of us all.  They did everything they had planned to do except one thing. One of the original plans had the frogmen capturing our CO and taking him back to the sub, but somebody nixed it so that wasn’t done, but everything else was, and then some.   Afterward came the attack analysis, and of course, the get-together with the sub’s crew at the EM Club.  There things really got interesting.

The “enemy” didn’t rub it in too much, and besides, we had a pretty good excuse for not seeing them even though the weather was not all that bad.

We missed them because of the seals.  Actually, some of our defenders really had seen them but thought they were the seals again.  When they heard we had mistaken them for “seals” they howled with laughter.  “yeah!  That’s right!  You guys looked just like our seals”.  More laughter.  Seals indeed!   It may have been a big joke to those men but the brass took an entirely different view.  To quote a very famous line from Paul Harvey, “now you know the rest of the story”.

Navy seals. Oh, yes.  I did go through the sub.  The sub sailors have got to be the most grossly under paid people in the world.