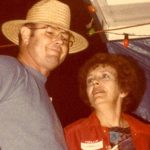 I was with the Naval Security Group Detachment (CT community) on Eastern Island. The WWII runways darned near covered the whole island. The boat pier was located approximately half way up the Northern side.  In this general area was located the barracks, mess hall, ham shack (KM6CE)/pool room, TV Quonset hut and a warehouse that served as a garage in the day time and movie theater at night.  On the eastern end of the island was the administrative offices (Old DF Shack). Located near on the southeast corner was the civilian scatter antenna array.  Our HFDF shack was located on the western end of the Island.  It was the AN/GRD-6 which used the U-Adcock array. The watch schedule stood was four-section (8 hours watches), scheduled eve, day, mid, with 56 hours off (days off for seaman and below were rare … we were the fodder used for working parties … unloading ships, burn detail, etc…).

While I was there in 1963/64, the Mike boats were our primary mode of travel between the islands (run on somewhat of a fixed schedule). They enabled us to go to Sand Island to the PX  (believe at that time cigarettes were 10 cents a pack, haircuts were free). They also allowed married personnel to travel from work to housing on Sand. During foul weather, the tugs or crash boats were used to transport personnel (if possible). There were some days even they wouldn’t venture out.   Our barrack were made of wood and consisted primarily of 4 large cubicles, each set up to accommodate 6-8 people (bunk beds).  On the east and west ends of the building were smaller cubicles set up for senior personnel (not accompanied) and other rates (non CT’s). In addition, there was a small laundry with washer & dryer and our recreation room with a Ping-Pong table.  The walls of the cubicles went up ¾ of way to the ceiling.  Needless to say, life on Eastern was interesting. Some of which is described below:

Feb 18, 1964.  I remember the day I was leaving the Island very vividly (almost like yesterday).  I remember after the longest wait inside the terminal, we finally boarded the aircraft.  After what seemed like hours, the pilot was starting the engines (there were only two) something fell to the tarmac.  We were immediately deplaned and returned to the terminal.  After a lengthy repair, we were all told that this week’s official log flight from Midway Island to Hawaii was canceled.  We then learned the aircraft was going to return to Hawaii anyway (for repairs?).  Guess what, all volunteered to leave on that flight, figuring if the pilots trusted the aircraft enough to return it to Hawaii, we weren’t going to spend another night on Midway. Needless to say, we arrived in Hawaii safely.

If I had it to do over again, I would still be there (smile)!