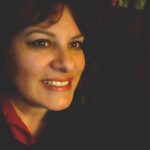 The 4th of July – A Midway Story

The first time I remember celebrating the 4th of July was when we lived on Midway. It was a big day on the island. There was a parade and a carnival. The men had made a ride that featured goonies crafted out of plywood and then painted them to look like the albatrosses. It felt like you were sitting on their backs and flying around in a circle.

Coming to a mysterious cloth with a fishing pole sticking out of it, my dad said to me, “See what you can catch on your line!” I held onto the pole with no idea what to expect until there was a tug. Dad showed me how to reel it in. On the hook, a small plastic toy of some sort. I have no idea now what it was, but the feel of the experience has never left. It was confusing and fun because it was all new.

Later that evening, as the sun began to sink over the ocean, we made our way to the beach, the adults settling on blankets and beach chairs, some of them strumming guitars. We kids ran free. All these years later, I can hear the laughter and feel the happiness. And it WAS a happy time, so I don’t know why I’m starting to cry as I write this, except that I miss it and know it can never be that way again.

And then, against a backdrop of velvet night sky, a gigantic boom, followed by a shower of colorful sparkles that reminded me of glittery rainbows.

At first I was scared of the thunderous sounds as they crashed and echoed above and ran to share the shelter of Dad’s arms with my brother. But the beauty of the fireworks as they cascaded gracefully down to the water won me over.

Out of all the Independence Days I have celebrated in my lifetime, that year on Midway remains the one I remember best.