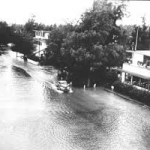 The tsunami had caused severe damage to Kamchatka Peninsula and then proceeded throughout the pacific. Midway Island was inundated with 1 m of water, flooding streets and buildings. On the Hawaiian Islands the waves destroyed boats, knocked down telephone lines, destroyed piers, scoured beaches, and flooded lawns. In Honolulu Harbor a cement barge was thrown into a freighter. In Hilo Bay a small bridge connecting Cocoanut Island to the shore was destroyed by a wave when it lifted off its foundation and then smashed down.